The Eighth Wonder Of The World

The Eighth Wonder Of The World André René Roussimoff best known to the world as André the Giant, was a French professional wrestler and actor.

The Giant famously feuded with Hulk Hogan, culminating at WrestleMania III in 1987. Andre’s best-remembered film role was that of Fezzik, the giant in The Princess Bride.  His size was a result of gigantism caused by excess growth hormone, which later resulted in acromegaly. It also led to Andre The Giant being called “The Eighth Wonder of the World”.

In the World Wrestling Federation (WWF, now known as WWE), Roussimoff was a one-time WWF World Heavyweight Champion and a one-time WWF Tag Team Champion. In 1993, he was the inaugural inductee into the newly created WWE Hall of Fame. 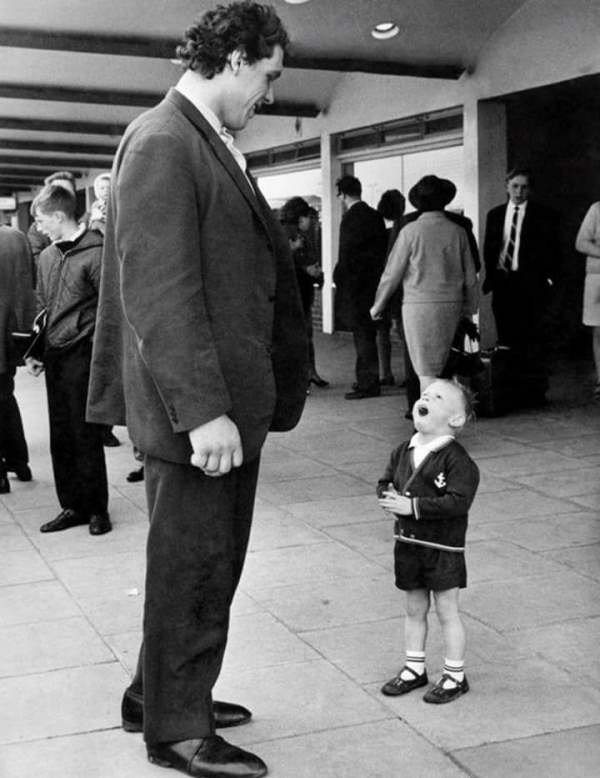 Born Andre Rene Roussimoff, on May 19, 1946, in Grenoble, France. Roussimoff suffered from acromegaly, or “giantism,” a endocrynological disorder that causes the body to secrete excessive amounts of growth hormones and produces continual growth, especially in the head, hands, and feet. He reportedly inherited the disease from his grandfather. One of five siblings, Roussimoff left his family’s small farm at age fourteen. After training with the French wrestling champion Frank Valois, he wrestled in Montreal under the name Jean Ferre and in Japan as “Monster Roussimoff.” He became known for his baby face and intimidating physique, and soon proved virtually unbeatable in Canada’s wrestling circuits. Valois, acting as his manager, set up a meeting with the wrestling promoter Vince McMahon, Sr. In 1973, Roussimoff debuted at Madison Square Garden as “Andre the Giant.” 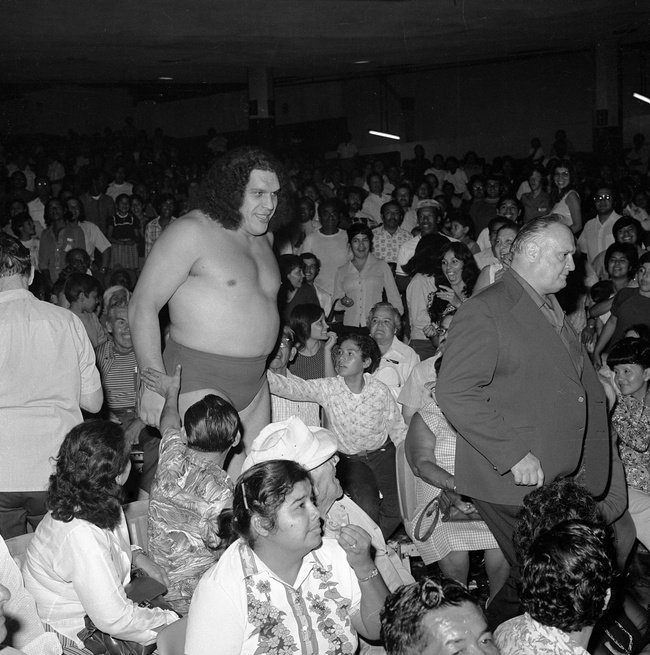 During the 1970s, he wrestled more than 300 days a year and became the world’s most famous professional wrestlers. Though he never lifted weights, he was thought by some to be the strongest man in the world. He remained dominant into the late 1980s, defeating Hulk Hogan for the World Wrestling Federation Heavyweight Title on February 5, 1988.

At his largest, Roussimoff was probably six feet eleven inches tall, though he was advertised as seven feet four inches. He weighed close to five hundred pounds and was famous for his immense capacity for alcohol and food–it was once estimated that he consumed 7,000 calories a day in alcohol alone. His phenomenal stature led to a movie role as Fezzik, the gentle giant in Rob Reiner’s 1987 film, The Princess Bride. Roussimoff also appeared in several other films and television shows, but Fezzik remained his most cherished role–he was known to carry a videotape of The Princess Bride with him when he traveled and hold frequent screenings at home and on the road. Roussimoff, who never married, lived most of the year on a 200-acre ranch in Ellerbe, North Carolina You Can read the Full Andre The Giant Bio at Biography.com

From HBO Sports, WWE, JMH Films and Ringer Films comes Andre The Giant, a documentary examining the life and career of one of the most beloved legends in WWE history. The ambitious, wide-ranging film explores Andre’s upbringing in France, his celebrated WWE career and his forays into the entertainment world. It includes interviews with Vince McMahon, Hulk Hogan, Ric Flair, Arnold Schwarzenegger, Billy Crystal, Rob Reiner, family members and more.

Emmy-winning Executive Producer Bill Simmons, who joined HBO in 2015 and founded sports and culture publication The Ringer, describes Andre as “the ultimate unicorn” and “a true legend.”

“Everyone who ever crossed paths with him has an Andre story — and usually four or five,” says Simmons. “I’m delighted to join forces with [director] Jason Hehir and WWE so we can capture Andre’s amazing story once and for all.”

At 7’4″ and 500 pounds, Andre the Giant could have been famous for his size alone. His drive, talent and ambition, however, proved to be as big as Andre himself, and the wrestler became legendary for his achievements in and out of the ring.

Andre was born Andre Rene Roussimoff in Grenoble, France on May 19, 1946. His parents, Boris and Marian Roussimoff, and four siblings were of average size. Andre, however, suffered from acromegaly, a disease that results in an over abundance of growth hormones. Also known as Giantism, this disease caused Andre’s body to continue growing his whole life, and by the time he was 17 he stood 6’7″.

Due to his immense stature it seemed inevitable that Andre would excel in the wrestling world. He had just started to make a name for himself in the ring as “Monster Eiffel Tower” or “Monster Roussimoff” when French-Canadian wrestler Edouard Carpentier first laid eyes on him. Carpentier was impressed with Andre’s raw talent and decided to bring him to North America…